Paiwan society is split into four classes: chieftain, nobility, distinguished, and commoner. Nearly all land belongs to the chieftain/noble class, and the commoners have to pay rent. The distinguished pay less rent/tax than the commoners and get to wear special tatoos. Traditionally, only the chieftain/noble class was allowed to wear intricately decorated clothes. Class is determined by birth, but it is possible to change one’s place in the hierarchy by great deeds or marriage.

Most of the indigenous societies in Taiwan are patriarchal, but the Paiwan are an exception. In Paiwan society, all possessions are inherited by the eldest child – regardless of the child’s gender. Chieftains are selected the same way, so the Paiwan have female and male chieftains (I do not know how traditional Paiwan culture reacts to gender-queerness). There is still a gendered division of labor (for example, hunting is an activity mainly for young men), but as far as power and privilege, the Paiwan are gender-egalitarian. 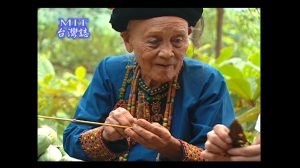 I once met a man in Taipei whose mother is Hoklo (i.e. of Chinese descent) and whose father is Paiwan. In traditional Han Chinese society he’s not considered Han because he doesn’t have a Han father. And, as he put it ‘mothers are very important in Paiwan culture’ (which brings this song to mind). Therefore, according to Paiwan tradition, he’s also not considered Paiwan because he does not have a Paiwan mother. Fortunately, most contemporary Taiwanese people, particularly in the younger generations, do not care much about such traditions. To them, someone with mixed Paiwan/Hoklo ancestry is clearly Taiwanese.

The Paiwan people had previously been controlled by the Puyuma (who had dominated southern Taiwan). In the Mudan Incident of 1871, the Paiwan people killed many Ryukyu shipwrecked sailors. When the Japanese asked the Qing court for compensation, the Qing claimed that the tribe was ‘wild’ and therefore the Qing were not responsible. The Japanese interpreted this as a renunciation of Qing sovereignty of Taiwan, which led to the 1874 Taiwan expedition where the Japanese directly punished the Paiwan people. After this, the Qing tried to exert military control over the ‘wild’ lands of Taiwan and … did not exactly succeed. In 1895 Japan took over Taiwan.

Continue to “The Paiwan People (Part 2)”

Some of the information in this entry came from the book Carefree Walks through Mountain Forests in Southern Taiwan (高屏山林縱情遊) and this website.

2 thoughts on “The Beidawushan Series: The Paiwan People (Part 1)”