Shelled acorns, sitting in a jar of water.

As it so happens, I live near groves of native oak trees, yet it was only last year that it occurred to me that I could also gather acorns and eat them.

Once the notion got into my head, I started paying a lot more attention to oak trees than I ever had before.

I had acorns, great!

Then I had to shell them and remove the tests. That was time-consuming, not in the least because acorn shells are soft … rather than cracking them off, it was more a matter of peeling them off. At least it’s a relaxing, not-mentally-challenging activity, so eventually I got a bunch of shelled acorns.

“The Best Way to Make Acorn Flour” and “Acorns, the Inside Story” were my main guides for DIY acorn preparation. As recommended, I blended the acorns with water, made a slurry, and tried to change the water until the tannins were (almost) all out. However, I did not find their methods for changing the water entirely practical, so I ended up doing my own improvisations, such as using a baster to extract the tannic water.

Here is the acorn-water slurry. The tannic water (brown) is at the top, with a light layer of starch, with a (slightly darker) layer of acorn meal below the starchy layer.

My first attempt … I thought I had leeched out the tannins, since I couldn’t taste it in the water, but I did not taste the acorn meal itself … uh uh. The results were inedible.

The acorn meal, straight out of the jar.

After pouring out the acorn meal, I used a flour sack towel to squeeze out all of the water I could. 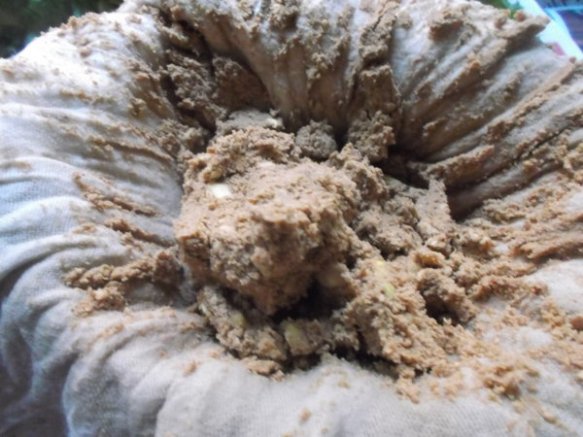 I then put it in a pot, added fresh water, and cooked it as a porridge. The results … there was still a faint tannic taste, but all I had to do was add a dash of cinnamon, and then I could not taste the tannins at all. It probably was no more tannins than are in foods such as walnuts (indeed, the tannic taste made me think of walnuts), so I figured it was not a health risk.

In my next attempt, I tried a different leeching method – I used whole acorns rather than blended acorn/water slurry, and rather than just using fresh water, I used a mix of water and baking soda. After a couple weeks I was getting impatient, so I tried the hot water method – boiling the tannins out of the acorns, and changing the tannic water with non-tannic hot water about every 15 minutes. A few hours later, I had boiled acorns with the tannins mostly removed (they could still be tasted, but not so much more than walnuts, so I figured it was safe). I then roasted the acorns, which made them a little firmer, but they were still fairly soft.

In addition to the acorns from Niles Canyon, I have also gathered acorns from San Francisco, so eventually I intend to shelling, leeching, cooking, and eating them as well. Hopefully I’ll get better at this process.

So, aside from edible acorns, what did I get out of all of this effort? That is a question I will answer in Part 2.