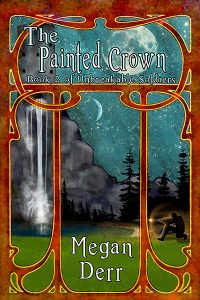 Last month, when I ordered a bunch of asexual fiction from Less Than Three Press for my series of reviews for Asexual Awareness Week, I also pre-ordered The Painted Crown by Megan Derr. Since it was not available for download then, I could not review it in October, but I can review it now.

What Is This Story About?

Prince Ishtari is a “guest” (re: hostage) in the kingdom of Tallideth in order to maintain a fragile peace. His is a master marksman and a trained assassin. His feels like his life sucks. It does not help that his beloved fiancée, Flora, decided to break off the engagement.

Then he meets Lord Teverem and his nieces and nephew. Ishtari learns that Teverem’s nephew, Ceverth, is in great danger, and in order to protect Teverem’s family, he might have to marry Teverem (this is a universe where nobody bats an eye if two men marry each other).

What Sexual and/or Violent Content Does This Story Contain?

There is kissing, and a sex scene written in multiple paragraphs of detail. As far as violence, there is kidnapping, murder, and a suicide attempt

Tell Me More about This Novel.

This is the second book in the Unbreakable Soldiers series. I did not read the first book. I think some parts of the plot (particularly the details of the political machinations) would have made more sense if I had read the first book, but I was able to follow the story well enough anyway.

I liked Ishtari well enough as a character. Yes, he’s killed lots of people, but that’s understandable given his circumstances.

Unfortunately, I found Teverem boring. And by extension, that meant I found Ishtari and Teverem’s relationship boring too. And given that this is a romance in which that is *the* pairing, that pretty much spoiled the story for me. I kept on wishing that the Ishtari/Teverem story would become a minor subplot so that Ishtari would be free to do something awesome, or at least entertaining, while knowing that was not going to happen. Actually, Ishtari did get a subplot which was not particularly Teverem-related, and yes it was more interesting, but I still felt unsatisfied because I felt like Ishtari got over the obstacles too easily.

I am not going to spoil the ending, but suffice to say, the fact that I totally did not feel the romance between Ishtari and Teverem made the ending seem particularly ridiculous.

You know what would have made the story much more interesting to me? If Flora had not broken off the engagement. Then Ishtari would have had to choose between marrying the one he believed was his One True Love and marrying Teverem in order to protect innocent children. That would have been an interesting choice, especially given that Istari is grey-asexual and believes that he may never meet anyone besides Flora who he will feel sexual attraction towards. As it was, it seemed like Ishtari resolved all problems either through his awesome assassin skills (way too easy) or problems went away on their own without Ishtari having to struggle or learn anything.

Ishtari is grey-asexual, and Teverem is demisexual. The word ‘demisexual’ is never used, but it’s clear that that is what the characters are describing. Oh, and on the asexuality content scale I would rate this as a 2.

Rarely was Istari interested in anyone, sexually or romantically. Most of the time, he simply didn’t care. But Moons, he had cared that day.

Here is the scene in which we learn that Teverem is demisexual:

“It’s not that I’m opposed to getting married,” Teverem said, then hesitated, facing twisting unhappily. After a moment though, still speaking haltingly, he said, “I have never been as inclined toward certain… amorous elements as most people, and that tends to put people off marrying me. I’m not entirely disinterested, just… there must be something built before I feel amorously inclined.”

“Ah,” Istari said. From all the hesitation, he had been braced to hear something horrible or heartbreaking. “That’s a stupid reason not to marry someone. I mean, for other people not to marry you.”

Teverem’s spoon jerked where he’d just dipped it into his bowl, and he looked up in surprise. “That’s not the usual response I receive.”

“I’m not so different, though it’s more I simply rarely feel sexual interest at all.” He stared to say ‘Flora,’ then almost ‘my former fiancée’, but finally managed, “I had a lover some time ago, but she was the first to stir such an interest in many years. I also have a friend, someone I used to work with in the military, part of team, who detests sex. Cannot stand the idea of someone touching her.” Istari smiled. “It was one of the things that first made us friends. They are supposed to be joining us at Andamar, so you will probably meet her.”

Smiling, looking happy in a way Istari had never seen, Teverem replied, “No one has ever understood me so easily, Highness. Thank you.”

Here is the scene where we meet Ishtari’s sex-repulsed friend:

He pointed a thumb at Ashton. “She’s the one I mentioned to you at the tavern last night.” At Ashton’s confused look, Istari said, “He’s like us regarding sex. More like me than you.”

“Oh,” Ashton replied and smiled brightly at Teverem. “No wonder Istari was so quick to steal you from your cradle.”

But leaving aside all the complicated issues between them, Teverem had stated quite plainly that he was not sexually inclined unless there was already an established connection. That connection most certainly did not exist. How could it, given the circumstances?

And Teverem’s demisexuality is mentioned yet again:

Istari swallowed, fingers twitching with an urge to touch, but disbelief and anxiety held him back. “You also said you were not inclined—”

“I do not feel desire for people to whom I am not first emotionally attached,” Teverem said. “You must be the only person who has not noticed I am quite attached to you.” He didn’t give Istari a chance to reply, just leaned up and kissed him again, and if Istari had thought he was being forthright in the shop…

I may have missed one or two passages, but I think I have excerpted 90% of the sections which are relevant to asexuality.

It seems to me that the grey-asexuality and demisexuality has hardly any impact on the development on Ishtari and Teverem’s relationship in the sense that I think things would have played out basically the same way if Ishtari had been bisexual and Teverem has been bisexual/homosexual. What to make of that? Well, on the one hand it does not explore the grey-asexual or demisexual experience in great depth. On the other hand, if a romance works just as well whether the couple is bi / bi or whether the couple is grey-ace / demi, then why the heck not go with the grey-ace / demi combo? Much as I like fiction which explores asexuality (including grey-asexuality) in depth, there is also a place for fiction with ace characters which doesn’t take a deep dive in that direction.

Was This Written by an Asexual?

6 thoughts on “Review: The Painted Crown by Megan Derr”