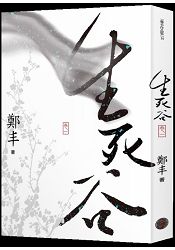 The cover of The Valley of Life and Death

I have found something amazing – an wuxia novel with a female protagonist who is not at all interested in romance. If you haven’t read as many wuxia novels as I have, you can’t appreciate just how amazing that is. It’s called The Valley of Life and Death (《生死谷》), by Zheng Feng (鄭丰). Did I mention that it’s amazing?

Anyway, before I continue, I’ll offer a brief overview of the story…

What Kind of Story Is This?

The story is set during the late Tang Dynasty (in the early 800s A.D.) when the imperial government of China is unstable.

Pei Ruoran is the daughter of a high-ranking scholar. At the beginning of the story, she’s seven years old, and she’s friends with Wu Xiaohu, the bastard son of the prime minister. They are both captured and thrust into a valley with about two hundred other children. They are trained in skills such as climbing and martial arts, and over the years, they have to pass the ‘three tests’. For example, the second test is that all of the surviving children are left in the valley for winter without food, and they will be kept there until only eight are still alive – and the most readily available source of food is each other’s bodies. Pei Ruoran and Wu Xiaohu just want to go home, but after years of being in that valley, will they be able to return?

If this sounds like The Hunger Games set in Tang-Dynasty China, that’s because it sure feels like that (though, for what it’s worth, I think The Valley of Life and Death is better than The Hunger Games). The preface specifically mentions that it’s like stories such as The Hunger Games, Lord of the Flies, and The Drifting Classroom.

The story starts when Pei Ruoran is seven years old, and (if one excludes the epilogue) ends when she is nineteen years old.

One would not expect a seven year old to be particularly interested in romance or sex, so at first, I had no idea that she would continue to be uninterested as a teenager, especially since this is an wuxia novel. As she grew older, I kept on expecting her to start showing interest in romance (though not necessarily sex because, again, this is wuxia), and it was not until the end that it turned out that, nope, she never becomes interested in romance at all in her entire life.

At the beginning of the novel, it seemed there would be two co-equal protagonists, Wu Xiaohu and Pei Ruoran, and that Wu Xiaohu may even become the primary protagonist. Thus, I was surprised when Wu Xiaohu gradually became a less important character. While he retained major character status all of the way to the end, the finale of the story is really about her, and not much about him. Though there are other wuxia novels centered on female protagonists (as well as Tiān​ Xiāng Piāo by Wolong Sheng in which the male protagonist dies halfway through the novel so the women who were in love with him are suddenly promoted to protagonist status)​​, this was still a pleasant surprise.

It is stated over and over again that Pei Ruoran only considers Wu Xiaohu to be a friend and a brother, and that she has no romantic feelings for him. At one point in the novel, (when she is about 15 years old IIRC) another character assumes she must have romantic feelings for Wu Xiaohu because she is so close to him, and she thinks that, not only is she certain that Wu Xiaohu feels like a brother to her, she does not even know what romance is. This is the strongest evidence in the novel that Pei Ruoran may be aromantic.

Zheng Feng’s afterword to the novel is very interesting, but I am just going to focus on the part where she talks about the lack of romance in the novel. She says in the afterword that she did try to work in a romance for Pei Ruoran, but it did not work, so it was taken out of the story. She also says, and this is a quote:

The Valley of Life and Death is the only novel I’ve written which does not involve a lot of romance; that’s probably because the characters are all killers who spend all day struggling with matters of life and death; wouldn’t romance be too much of a luxury for them?

I am relieved that Zheng Feng put a question mark at the end of that sentence, indicating that she’s not really sure why there is not much romance. To me, as an aromantic, the explanation that they do not engage in romance because it’s a ‘luxury’ not make much sense. It could explain why they do not pursue romance, but it seems to me that alloromantic people will experience romantic feelings whether or not they can/want to pursue romance. Furthermore, since this novel is easy to compare to The Hunger Games, I will say that the characters in The Hunger Games have even less opportunity to pursue romance, but that does not stop them.

For me, the most plausible explanation is that Pei Ruoran is simply aromantic. Especially since, unlike Katniss Everdeen, she never has anything to do with romance during her entire life.

At this point, I suppose I ought to say a few words about the major male characters, Wu Xiaohu and Tian Shaxing. I don’t know what their sexual or romantic orientation is. They both develop strong feelings for a female character other than Pei Ruoran, and it is not clear whether or not these feelings ever become romantic or sexual (at least to an aromantic-asexual like me). Furthermore, Tian Shaxing is never a point-of-view character, which makes this kind of thing harder to judge.

By the way, did I mention that this is a great novel, possibly my favorite novel that I’ve read in 2017 so far? I’d love it even if there was no sign of the protagonist being aro or ace.

Anyway, more about the implications of Pei Ruoran being aromantic.

A good portion of the novel is about Pei Ruoran trying very hard to protect/help/keep alive her friends Tian Shaxing and Wu Xiaohu. I do not want to spoil the novel, so I’m going to say this in a vague way … you know how some aro people feel like their alloromantic friends accept the benefits of friendship without investing as much as the aro person does because they value the friendship less? That arguably happens in this novel, in that Wu Xiaohu and Tian Shaxing do not always invest as much in Pei Ruoran as she invests in them.

Unfortunately, I don’t think this counts as aro-ace fiction.

Even though Pei Ruoran being aro-ace makes way more sense to me than any other interpretation, and I will hella recommend this novel to anybody looking for an aro-friendly wuxia novel, I would not go so far as to put this on a list of fiction with aro-ace characters. I don’t think aro-ace fiction must explicitly state that a character is aro or ace, nor do I think Word of Ace is necessary, but I think that, short of an explicit statement that a character is ace or aro, the experience of being ace and aro needs to be described clearly enough that it is recognizable. I think this novel is one step short of that, but it is still short. Thus, I would not, say, use it as an example for the ace tropes series.

Nonetheless, I am still super happy with this novel. And I would like to point out that I’ve have previously written about another Zheng Feng novel in the post A Novel Featuring a Non-Sexual/Non-Romantic Intimate Relationship, which goes to show that even Zheng Feng protagonists who do not seem to be aro or ace can have intense nonromantic personal relationships with someone of a different gender.

13 thoughts on “The Valley of Life and Death: An Wuxia Novel with a Female Protagonist who May Be Aro-Ace”