Guo Fu is the Hate Sink in Shén Diāo Xiá Lǚ. She’s not a villain – she’s loyal to her country and her family, she never actually murders anybody innocent (though she tries), and she never sexually assaults anybody. However, she is just about the most unlikeable character who is not a villain. She’s a spoiled brat, she has no humility, and she’s a bully.

Even though I’ve written a lot of other posts about Shén Diāo Xiá Lǚ, I think I have hardly written anything about Guo Fu before (have I even mentioned her before on this blog?) That’s because I never had much to say. She’s not a total two-dimensional character in the original novel – there are nuances which suggest that Guo Fu is a complex human being (more so than, for example, Dolores Umbridge) – but there are so many other things going on in the novel which are so much more interesting that my attention never centered on Guo Fu’s character. 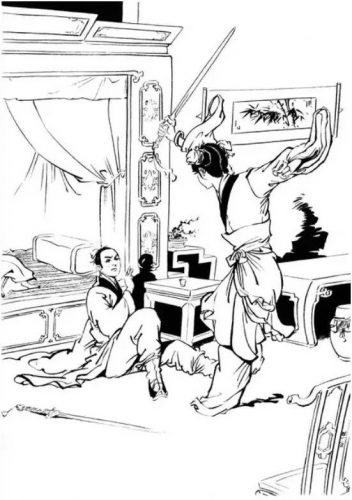 This is the most famous scene in the novel featuring Guo Fu (yes, she is the young woman with the sword). If you are okay with watching violence and spoiling the outcome of this scene, you can watch how the 1983 TV adaptation handles this scene.

First of all, the scriptwriters gave Guo Fu a lot more screentime than she has pagetime (?) in the novel. They even added a whole new subplot to further develop her character. She actually grows and become less of a self-centered brat. Of course, just as in almost every other case where a female Jin Yong character experiences character growth, she does it so she can impress a man she has romantic feelings for, but it still makes her a more complex character.

And that brings me to another point – the scriptwriters make her a little more likeable than in the novel. She’s still spoiled, she’s still a bully, she still does all of the bad things which makes her a Hate Sink character, but she also has more in the way of redeeming qualities. In the novel, it makes sense that multiple men want to marry her because she’s beautiful and comes from a prestigious family, but in the TV show, it seems plausible that men may also want to marry her because they sincerely like her as a person. She even comes off as more charming than her sister Guo Xiang (partially because the Guo Xiang in this TV adaptation is lacking in warmth), which is the total opposite of the novel. 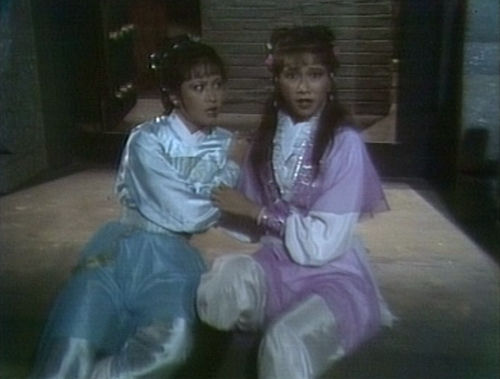 Guo Fu is on the left and her sister, Guo Xiang, is on the right.

There is one instance where, instead of adding to what is in the novel, the scriptwriters made an outright change. That is with regards to Guo Fu and Yang Guo’s relationship. In the novel, Guo Fu and Yang Guo were always in 100% agreement that they did not want to marry each other. When her father offers her hand in marriage, her reaction is much like her reaction in the 2006 TV adaptation, which you can see here.

Compare that to how Guo Fu reacts to Yang Guo refusal of the marriage proposal in the 1983 TV adaptation. She’s really upset. The scriptwriters built up to this moment by showing Guo Fu and Yang Guo having fun together, and showing Guo Fu really warm up to him. Here is an example of such a scene.

Though I like both the way this is done in the original novel and the way it’s done in the 1983 adaptation, I think I prefer the change made by the 1983 adaptation because a) it makes Yang Guo’s refusing Guo Fu’s hand in marriage more dramatic and b) it adds complexity to Guo Fu’s character and c) in some ways in makes more sense (though it other ways the novel makes more sense).

Guo Fu as seen in the opening theme song.

I think the scriptwriters did a lot to flesh out Guo Fu’s character – and then Annie Liu, the actress, took it and ran. She was a live wire. I’m surprised some reviewers consider Annie Liu to be a disappointing Guo Fu, since her performance is one of my favorite performances in the show. Apparently, some people do not like her because she’s not pretty enough. True, she’s not as physically beautiful as some of the other actresses who have played Guo Fu, and based on what’s I’ve seen of the 1995 adaptation, Gigi Fu also did a great job playing Guo Fu, but a) Annie Liu is pretty enough and b) beauty is far from the most important aspect of Guo Fu’s character and c) Annie Liu really brought Guo Fu to life, at least for me.

I never imagined that Guo Fu would be one of the highlights of a TV adaptation Shén Diāo Xiá Lǚ, but it is so. And this is one of the reasons I watch adaptations instead of simply re-reading the novel – a good adaptations bring out aspects of the story I had not appreciated before.