If you want to know what I thought about being aromantic vs. being asexual in the year 2012, I have an old blog post for you. And, aside from being more certain that I am aromantic, my thoughts on this have not changed much since I wrote that post in 2012. In particular, I still think that being aromantic has a greater impact on my personal life than being asexual. END_OF_DOCUMENT_TOKEN_TO_BE_REPLACED

There are many forms of Chinese, and many of them are not mutually intelligible. For many years (basically until I started studying Mandarin) I wasn’t good at distinguishing the sounds of the various forms of Chinese. It was only through exposure that I learned how to identify forms of Chinese just by hearing it, and I’m still far from perfect. In particular, because I’ve had very little exposure to Shanghainese, I’m still not good at identifying it by sound alone.

Why do I think it is good to be able to distinguish these languages? Because it is one thing to read something like ‘Hakka culture is primarily found in China, Taiwan, and Southeast Asia’ or ‘Cantonese is the language of the Punti people‘, and another thing to be able to recognize the languages. Though merely being able to recognize the languages doesn’t make one an expert, I think it is enough to imprint on the mind that these cultures/peoples/languages exist in a way that just reading/hearing the statement ‘these cultures/peoples/languages exist’ cannot.

To start, this helpful video teaches common phrases in each of these five languages. In that video, it’s obvious that these languages are related, yet not mutually intelligible. (That video also refers to Mandarin as “guān​huà​“, which is interesting). END_OF_DOCUMENT_TOKEN_TO_BE_REPLACED

This is continued from Part 2.

Hey, you removed the “(Not Really)” from the title. Does that mean you’ve really started this KonMari nonsense?

Yes, I have definitely started the KonMari path. I have finished selecting which socks, T-shirts, and pants I am going to keep.

How many are you going to keep?

13 pairs of socks, 8 T-shirts, and 5 pairs of pants. But those numbers won’t stay fixed because a) clothes eventually wear out and b) I may choose to add to this collection.

How many of those T-shits are ace T-shirts?

Two of them. I was originally planning to let go of one of them because I didn’t like that it was mostly white, but instead I mixed tara powder and iron sulfate to dye it purple. I like the purple color much better, so I’m keeping it.

This is what the t-shirt looked like before I dyed it. 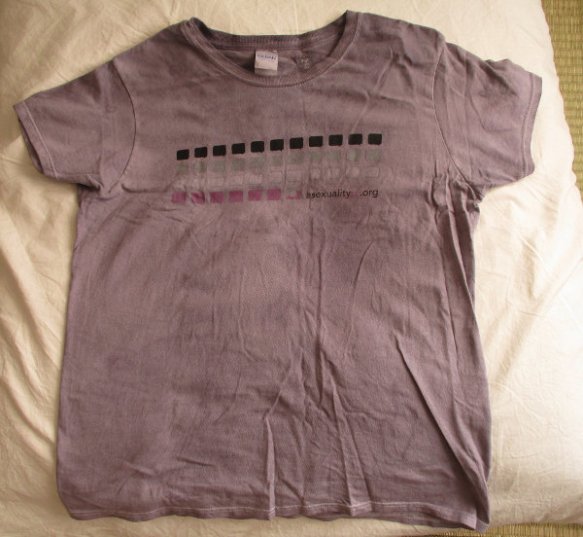 END_OF_DOCUMENT_TOKEN_TO_BE_REPLACED

I had vast piles of clothing in my room (writing this sentence in past tense feels very good). 95% of this clothing was clothing I never asked for, never wanted, and if a fairy had come along at any point in my life and offered to make those clothes magically disappear, I would have enthusiastically accepted the offer.
END_OF_DOCUMENT_TOKEN_TO_BE_REPLACED