In the Evolution Basin

John Muir preferred the word ‘saunter’ over the word ‘hike’. Among long distance hikers, there is also a saying ‘it’s about the smiles, not the miles’. It is about a difference in focus – focusing on distance covered and speed vs. focus on the immediate environment. 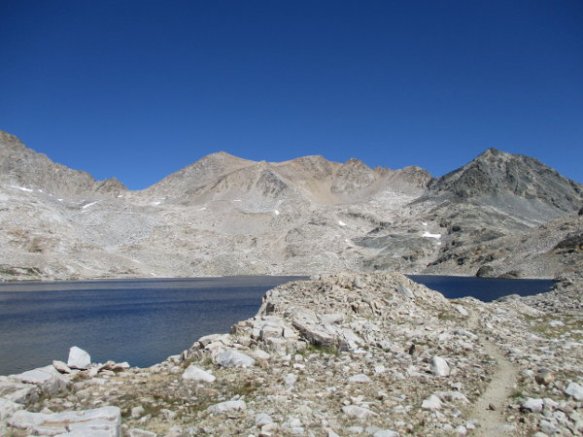 I think this is Helen Lake, at the top of LeConte Canyon

When I hike, most of the time I combine both focuses. I keep track to some extent of how much distance I’ve covered and how much time I’ve spent, and how far I have left to go to the destination and how long it may take, but I also try to let in the environment around me (after all, that is the point of why I am out there, right?) I rarely go for speed, and almost never try to be faster than anyone else (I’m not good at racing).

Sometimes I tip more towards one side of the spectrum than the other. 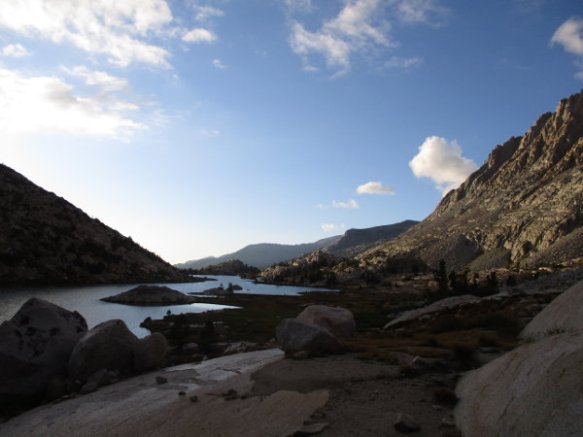 Evolution Lake in the evening

Last month (September), I hiked the section of the Pacific Crest Trail / John Muir Trail running from Red’s Meadow to the junction of the Bubbs Creek Trail (about 120 miles / 190 km), and then hiked the Bubbs Creek Trail (about 13 miles / 20 km) to reach a road, for a total of about 133 miles / 210 km. I did not resupply. I also used a bear can (required) which limited how much food I could carry. Covering 133 miles / 210 km of John Muir Trail on a single bear can of food is tough, and requires maintaining a certain pace (lest one runs out of food). 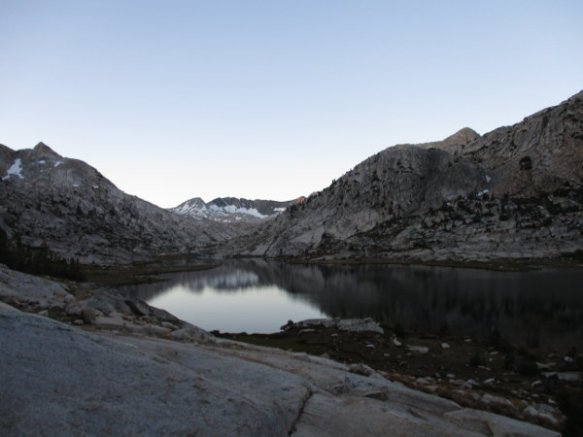 Evolution Lake in the early morning

On the fourth night I camped by Evolution Lake, in the Evolution Basin. On the morning of the fifth day, I moved up the Evolution Basin towards Muir Pass. I was aware of when I set out that morning, but did not pay attention to my watch until I reached Wanda Lake.

Between Evolution Lake and Wanda Lake in the Evolution Basin

Ordinarily, I take a break every 60-90 minutes, more frequently if the going is tough. I spent over two hours getting to Wanda Lake without thinking about taking a break, what time it was, and only a limited awareness of how many miles I was covering. I was too immersed in the scenery to care too much about such things. 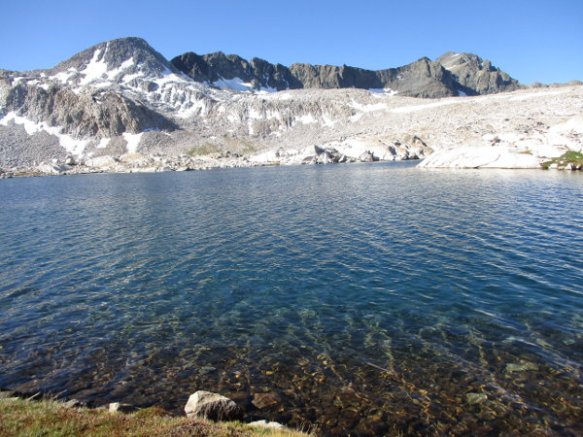 Wanda Lake – look at how clear the water is

I had my breakfast by the shores of Wanda Lake (it had been so cold that morning that I had not felt like eating breakfast at my campsite). The scenery dazzled me.

After sauntering around Wanda Lake with only a slight awareness of the passage of time, I reached Muir Pass. I figured that the Evolution Basin would be the more splendid thing I would see all day, and that what I would see for the rest of the day would hold me in less of a sense of awe. 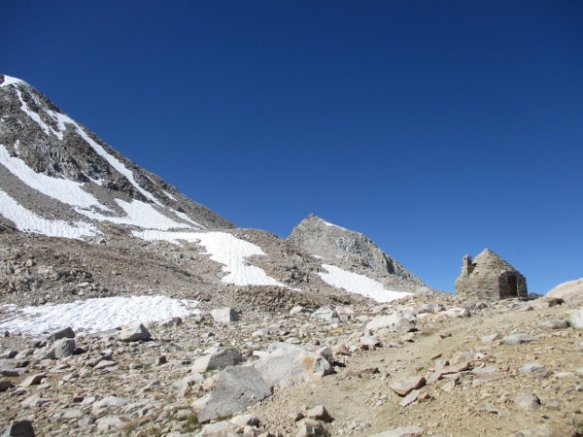 On the right is Muir Hut, which is on Muir Pass

As I descended from Muir Pass into the LeConte Canyon, the scenery continued to dazzle me. I don’t just mean that it was pretty – I mean that it was so sublime that it held me in a different state of mind. 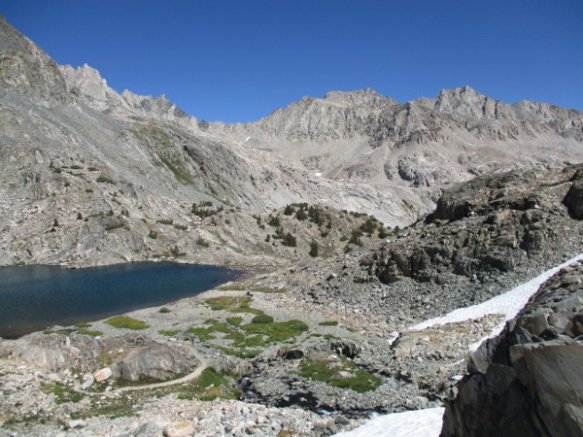 I knew, somewhere, that it would be good to take a break, but I wanted to continue to see what was lying in wait at the next turn of the trail, what grand scenery was around the corner. Besides, I was not tired.

One of the various lakes in LeConte Canyon, with snow even in September

Finally, I did take a break because I needed water (I had actually run out of water a while ago, and kept telling myself ‘well, I’ll get water at the next water source’ but then at the next water source I would tell myself ‘well, maybe I’ll take water at the next source instead of this one’). Between Wanda Lake and where I re-filled on water, without ever sitting down, I had sauntered on the trail non-stop for more than four hours.

This particular scene, near where I took my break, haunts me. My photography really does not do justice to this scene.

Though it is common for me to snatch moments where scenery heightens my senses during outdoor adventures, it is unusual for this to happen to me so continuously. Heck, under any circumstances, it is unusually to keep moving on my feet for 4 hours straight without sitting down and not even feel tired. 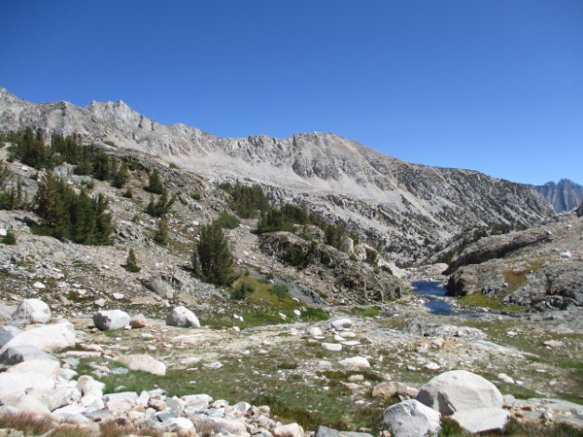 Looking down into LeConte Canyon

The scenery does change with elevation, and bigger elevation changes mean more dramatic change – I moved from the alpine zone of Evolution Basin and Muir Pass down into the valley of the Middle Fork of the Kings River with its lush forests (and deer – I saw deer).

Looking down into where there are forests of tall trees

As I got lower down in the canyon, my sauntering stopped, and I went back to thinking in terms of reaching my next camp. I finally took stock of how much time I had left, and how much distance I had covered. I realized that if I wanted to reach my intended campsite before dark, I would have to increase my speed. Since I was going downhill, that was possible, and I did that. It was also possible because I was not particularly tired. I wonder if, because I had swung so hard in the direction of sauntering for much of the day, I swung that much harder towards the ‘make miles by x time’ mindset later.

When it got closer and closer to dark, I admitted to myself that my intended campsite was probably out of reach before nightfall, and that it would be better to accept a closer campsite. Yet when I reached one potential campsite I did not feel like stopping, and then when I reached the next one I simply did not like it, so I ended up pressing for the campsite I originally intended to reach anyway – just when darkness fell. I did not need to turn on the headlamp to reach the camp, but while settling into camp I had to turn it on. That day I covered 18.7 miles (30 km), the longest distance I covered on any single day during my journey from Red’s Meadow to Bubbs Creek. 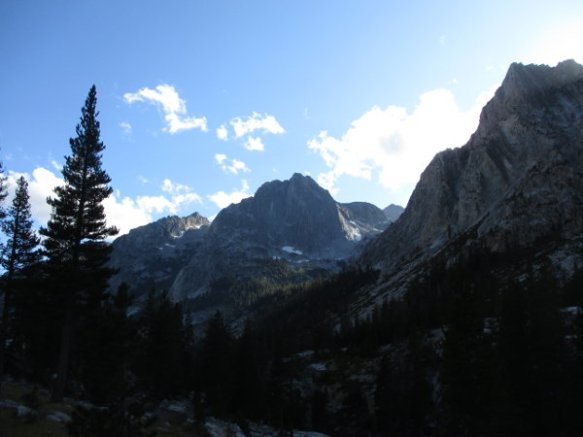 So there you have it – my experiencing with sauntering up, over, and down from Muir Pass.

5 thoughts on “Sauntering to and down from Muir Pass”