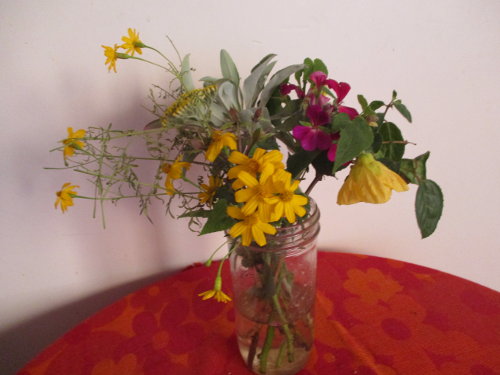 Here is a bouquet featuring several types of yellow flowers, some non-yellow geraniums, and some non-flowering white sage in the back-center.

I once took a two-hour workshop on how to make a flower bouquet. Thus, I know a few principles of choosing and arranging flowers, which is more than 99% of people know, but I am hardly an expert. END_OF_DOCUMENT_TOKEN_TO_BE_REPLACED 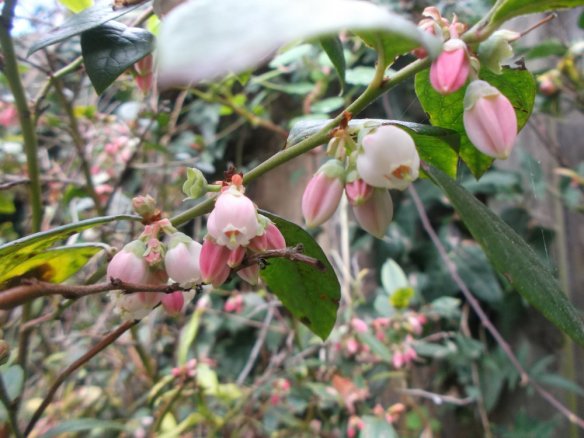 All but one of my blueberry plants are putting out flowers, and some of them are putting out a lot of flowers. Right now. In January. Every photo in this post was taken on the morning of January 22.

Some of the flowers haven’t opened yet (yes, some of these plants have an iron deficiency. I know. I’m going to address that).

In particular, the Sunshine Blue bushes (it’s one of the blueberry varieties I have) seem to have a lot of this bright pink unopened flowers now. 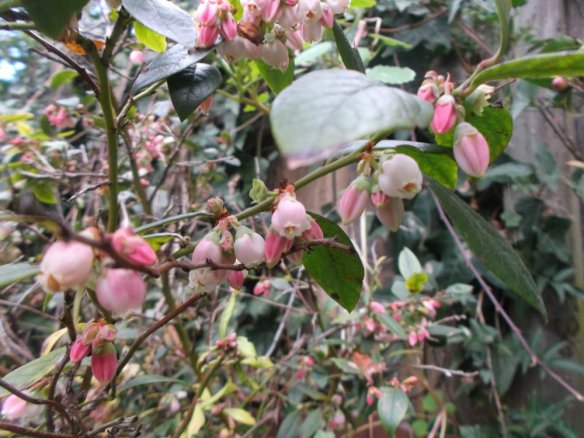 However, many of the flowers on the Misty bush (Misty is another blueberry variety) are in full bloom, and bringing in the hummingbirds (I’ve seen hummingbirds around the blueberries a few times this week).

If I were in the southern hemisphere, this wouldn’t be strange at all. But I’m in California. Blueberry bushes in January in the northern hemisphere are supposed to be dormant, not blooming. But I don’t just have flowers.

And some of these berries are almost ripe. 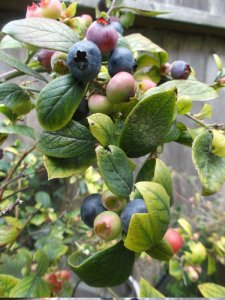 This blog is called ‘the notes which do not fit’. I can tell ya, blueberries, in January, in the northern Hemisphere, do not fit any of the standard knowledge about cultivating blueberries. About the only thing which almost fits is that I recall reading somewhere about blueberry farms in California experimenting with off-season blueberries so they can fetch higher prices. I guess California is the place for this kind of thing. Oh, and I know that one of the blueberry varieties I have, Sharpblue, can sometimes put out berries in October/November, but a) it is not October/November and b) the Sharpblue only has a few little flower buds right now.

The woodland strawberry is making a comeback, thanks to the December rains, and the yarrow is doing fantastic.

I don’t know what’s going on here, but if it means I get fresh blueberries in January/February, I’m not going to complain. 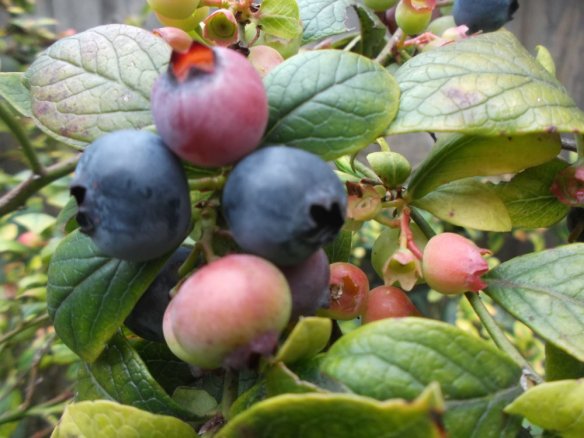 To the extent possible under law, the person who associated CC0 with this work has waived all copyright and related or neighboring rights to this work.