So, what did I get out of this labor-intensive exercise of gathering and preparing acorns for consumption?

Well, first of all, it made me look at my surroundings in ways I had not before. Even though I grew up around oak trees … I never even really thought about the fact that they were oak trees, let alone try to observe them. However, once I got it into my head that maybe I should try gathering acorns, I started paying way more attention to the oak trees which have been there since before I was born (actually, they may have been there since before my grandparents were born). I finally made seemingly obvious connections such as, hey, this is a major food source for the local squirrels and scrub jays. In fact, as I was watching the acorns ripen, I felt a bit of competitive heat with the squirrels and scrub jays – I was concerned they would take all of the good acorns before I could (as it so happens, there are plenty of acorns for everybody).

I also looked out for oak trees wherever I went during the acorn season. I noticed that acorns in Santa Cruz and Niles Canyon were ripening faster than in San Francisco, which is why my first harvest was from Niles Canyon. I noticed there were two species of oak trees in Niles Canyon, but only one was producing acorns – I don’t know whether I was simply out of season for the other species of oak tree, or whether the climate in Niles Canyon simply is not right for acorn production in the other species (which makes one wonder how it could reproduce in the canyon).

At first, I had hopeful notions that I could turn this into a real source of food. Some approaches to living in harmony with our ecology (for example, permaculture) strongly encourage getting food from trees since trees contribute more to the ecological system than, say, cereal grains, tree-agriculture does not require tilling the soil, etc. And as it so happens, some of the best examples of societies which managed to sustain itself for 10,000+ years without agriculture at relatively high population densities by getting much of their food from trees are … the indigenous societies of California, who had lived right here in what is now the San Francisco Bay Area.

California, as you may know, is going through a major drought, and for some reason commercial nut trees (such as almonds) require a lot of water. However, these oak trees are doing okay and producing acorns without irrigation – in fact, oaks are so common in California partially because they are drought-tolerant. A number of people who are looking for ways to get food in ways which do minimal harm to the environment have been paying attention to acorns … and I wanted to see how practical it would be for myself.

Well, given the way our economy is currently set up, DIY acorn gathering does not make a ton of sense. It simply takes too much labor to shell and leech the acorns. Granted, there are machines which could do the shelling for me … if I were will to invest a few hundred dollars, which I am not. Leeching is actually not so much of a labor issue – for example, one trick used by modern-day indigenous people is to store acorns in toilet tanks and let the leeching happen automatically every time the toilet is flushed – but it just takes a lot of time/water to do it, and if you want to preserve the oil/starches, it gets more complicated.

Of course, it only seems like a lot of water because I got to observe all of the water used in the process. Considering that the oak trees don’t need any irrigation, producing edible acorns actually requires less water than producing edible almonds.

However, 400 years ago, people in the San Francisco Bay Area would not have needed money, nor would they have had ‘jobs’. They would have had plenty of time to do the gathering, grinding, leeching, and cooking, especially since they did not need to expend any labor to care for the oak trees themselves. And it was a social activity for them – I know shelling acorns would be more fun if I could chat with people I liked while I did it. 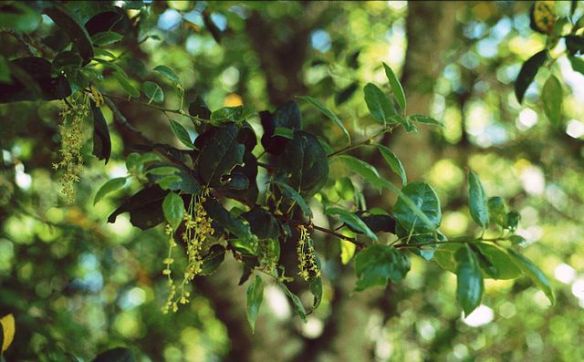 Maybe I’ll get better at processing acorns, or at least find less labor-intensive ways to do it, in which case it may become a semi-regular part of my diet. But even if it doesn’t happen, it was definitely an educational experience.