There is a very popular Mandarin pop song called “Dāo​ Jiàn Rú​ Mèng​”, and I am going to use it as a theme for a little tour of Sinophone Pop Culture (why ‘Sinophone’ rather than ‘Chinese’? Because China is not the only place where Chinese is spoken, and some of the artists who are mentioned in this very post are not from China).

What does “Dāo​ Jiàn Rú​ Mèng​” mean? I’ve encountered the following English translations of the title:

The most ‘accurate’ translation is “Sabers and Swords Are Like a Dream”, but I prefer the translation “A Life of Fighting Is But a Dream” because I feel it’s closest to the spirit of the song and the story which inspired this song.

So, for those of you who have never heard the song, or who just want to hear it again, here is Wakin Chau’s original music video. Wakin Chau both wrote the song and was the first singer to record it. (If you don’t understand Mandarin, don’t worry, I will later link to videos with English translations).

This song was originally one of the theme songs of the 1993 TV adaptation of The Heaven Sword and Dragon Saber (HSDS).

A dying woman holds her 9-year-old son in the 1993 adaptation of The Heaven Sword and Dragon Saber. Even though I haven’t seen any of the TV adaptations, when I see clips, I can often identify which scenes are being shown just from my recollection of the original novel.

I have not seen more than twenty minutes of any TV adaptation of HSDS, but I have read the original novel. One of the most memorable scenes in the novel (actually, it is one of the most memorable scenes I have read in any work of fiction) is as follows (violent melodrama alert): many people hate and want to kill a certain man because he has killed their loved ones. Two of the very few people who know this hated man’s whereabouts are a husband and wife. However they refuse to reveal the hated man’s whereabouts because they consider him to be their sworn brother, and they are forced to commit suicide. Their nine-year old son watches this happen. Right after his mother plunges the dagger in herself, she tells him that must remember all the people present so that, when he is grown up and strong, he can avenge her and his father. The boy says no, he does not want revenge, revenge will not bring his father back, all he wants is for his father to come back to life (he does not quite understand yet that his mother is also dying). That scene illustrates one of the key themes of the novel – people get incredibly wrapped up in cycles of avenging the wrongs done to their loved ones, but in the big picture, what is the point of all that violence inspired by love and hate?

[aside/rant: if you look at the above music video, you’ll notice that female characters have a large presence in HSDS, which is typical of wuxia fiction. In fact, one of the reasons I am so fond of wuxia is that it the wide array of compelling female characters. Yes, there is plenty of sexism in wuxia – HSDS itself has some misogynist content – but even sexist wuxia male writers tend to have more female characters who have more interesting roles in the story than some female ‘feminist’ writers of speculative fiction in English, let alone male writers of speculative fiction in English.] 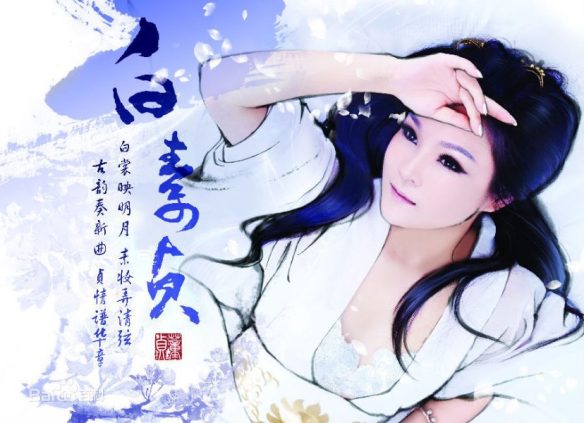 A picture of Dong Zhen

Recently, a lot of singers have been covering this song. One singer who has become well-known for performing this song is Dong Zhen. She mostly does singing for video game songs. She has built a fanbase by developing her public persona as being like the mysterious maidens one often finds in Chinese fiction. I’ve read that the ‘mysterious maiden’ stock character has been around in Chinese fiction since the Tang Dynasty (over a thousand years ago), but I know little of Chinese literature which is more than a hundred years old. I can say that the mysterious maiden continues to be a very popular stock character. She generally was raised in isolation from society (for example, Lian Nichang, one of the most famous examples of this archetype, was raised by wolves), is generally an amazing sword fighter or has some other fantastic skill, is gorgeous, and seems like someone from out of this world. Ironically, the only character in HSDS who fits the ‘mysterious maiden’ archetype, the Yellow Dress Maiden (she’s so mysterious that nobody knows her given name!), is just a minor character.

A picture of Kris Wu promoting the game ‘World of Sword’

In the past few years, Kris Wu has become one of the most popular celebrities in China. I admit that I have not seen any of his movies, but in terms of singing and looks … I don’t get it (China has way better singers – Dong Zhen for example – as well as actors who, IMO, are much more aesthetically/visually appealing than Kris Wu). Interestingly, even though Kris Wu is Chinese-Canadian, he first got into show business in South Korea, and started his rise to fame as a member of a popular K-pop band, EXO. And he definitely continues to have a strong K-Pop vibe … which might be why I don’t care for him. I don’t like K-Pop music, and no, it’s not because I don’t understand Korean, since I don’t like K-Pop even when it’s sung in a language I understand (English or Mandarin). I like Mandopop, Cantopop, and even J-Pop more than K-Pop.

In any case, Kris Wu recorded his own version of “Dāo​ Jiàn Rú​ Mèng​” to be the theme song for a mobile game called “World of Sword” (the lyrics are the same as Dong Zhen’s recording, it’s just a different English translation).

The Kris Wu version of “Dāo​ Jiàn Rú​ Mèng​” is my least favorite because … I feel that it misses the point of the song. To me it seems like ‘hey, I am a guy with a sword, cool!’ and yes, I admit that it is cool when he’s wearing that costume at the end of the music video and swinging that sword around, but the song is about something more. 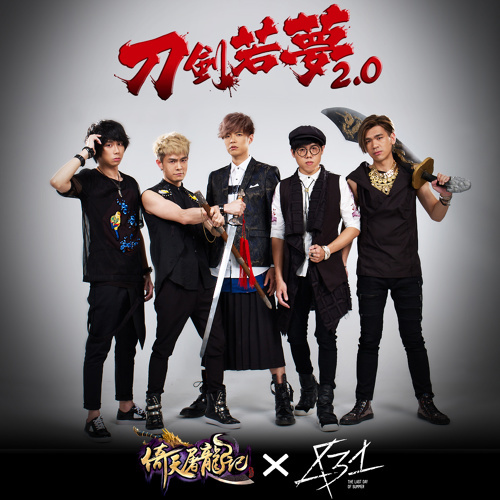 Here is the Taiwanese band Last Day of Summer. It looks like the guy second from the left is holding the Heaven Sword, and the guy furthest to the right is holding the Dragon Saber.

Anyway, in addition to being the theme song for ‘World of Sword’, “Dāo​ Jiàn Rú​ Mèng​” is also the theme song for a new Taiwanese mobile game adapted from HSDS. Or, rather, the theme song is “Dāo​ Jiàn Rú​ Mèng​ 2.0”. It’s performed by a Taiwanese band whose English name is The Last Day of Summer / 831. I know very little about this specific band, but the music video of their version of “Dāo​ Jiàn Rú​ Mèng​” feels Taiwanese too me. First of all, there are the traces of Japanese culture (the kimono the little boy is wearing, the tatami mats in the room) which are casually thrown into the video. Taiwan has been more heavily influenced by Japanese culture than any other place where Chinese is the dominant language, and the heavy Japanese influence is one of the things which distinguishes Taiwanese culture from other Chinese-speaking cultures. There is also something about the hairstyles and the way the singers dress … I can’t put my finger on it, but it feels Taiwanese to me. It’s certainly more the way Taiwanese ‘idols’ dress than the way Korean, or Japanese, or Chinese ‘idols’ would dress. The music video, of course, has footage from the mobile game. 831 also added some new lyrics/melodies to the song, which are about chaos and fighting one’s opponents with a little bit about love and hate, which makes sense for a mobile game which is combat-heavy.

[aside #2: I never thought about it before, but looking at the footage from the mobile game, I notice that none of the characters have any particular ethnic markings, even though they are all Chinese or Mongol. Yes, even the blond guy is ethnic Chinese according to the novel. Though the novel also says that his eyes were impaled by darts causing permanent blindness, whereas his eyes look just fine in the mobile game. By contrast, the the 1994 DOS game adapted from HSDS shows that the blond guy does not have functioning eyes. What was I saying? Oh yeah, you can tell that this game was made by Asians, in this case Taiwanese, because they don’t put ethnic markings on Chinese characters. It’s like what this blog post discusses.] 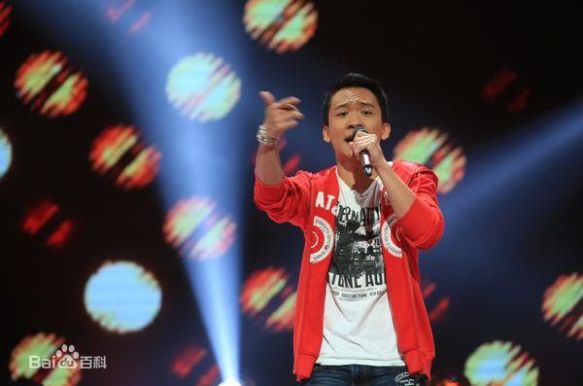 Riceboy Liu appearing on The Voice of China 4

Riceboy Liu is a Los Angeles rapper who specializes in multilingual rap songs. I’m not into rap music, but I have a thing for polyglots, so I happen to like like some of his songs. He was also a contestant on Season 4 of The Voice of China.

I have never seen an entire episode of The Voice, just clips. That includes The Voice of China. As it so happens, Dong Zhen appeared in the first season of Voice of China, and sang “Dāo​ Jiàn Rú​ Mèng​” in the blind auditions, but none of the judges picked her for their team. The song came back in Season 4, when it was used for the battle round between Riceboy Liu and Queen T, which you can watch here.

Queen T won the battle and stayed on the show (she eventually was the runner-up in the entire competition), which isn’t surprising since she’s the better singer, but I feel that I enjoy this version of the song so much thanks to Riceboy Liu’s creative contribution. I never imagined that I would enjoy a hip-hop version of “Dāo​ Jiàn Rú​ Mèng​” but I really like this one.

Of all of the versions of this song I’ve heard, this is the one with the strongest American influence (which is what one would expect when one of the performers is American). It’s not just that it adds a bunch of English lyrics (which don’t have much to do with the original song, but at least it’s different) and that it’s done in hip hop style – Queen T sounds like she also has an R&B influence on her singing style. Now I’m wondering what it would sound like if Aretha Franklin sang this song.

Anyway, if you contrast the Riceboy Liu / Queen T version of this song with Dong Zhen’s version, you can tell that they represent two different trends in Sinophone pop culture. Dong Zhen represents the trend of drawing upon a distinctly Chinese cultural history, whereas Riceboy Liu / Queen T represent taking popular styles from somewhere outside of Asia and making it their own. Wakin Chau, the songwriter, embodies the fusion of both of these trends, since he both draws from traditional Chinese culture and absorbs lots of influences from outside of Asia (especially rock music). Of course, influences from non-Chinese parts of Asia are also significant, as evidenced by the Korean influence on Kris Wu and the Japanese influence on Last Day of Summer / 831.

So that’s the conclusion of this little tour through Sinophone pop culture centered around a single song. I don’t know who will read this, but I enjoyed putting this post together, and if you got this far, I hope you enjoyed reading it.