I got a bunch of pieces of linen cloth which look like this:

Well, not quite. Because of the lighting, the cloth in the above picture looks slightly orange-pink, but in fact (at the time I took the picture) it was bright white.

I had recently be readings about natural dyes. Most dyes used in the United States these days are synthetic, and many are toxic or have a negative impact on the environment. Meanwhile, if one has a source of clean water and a way to boil water, using natural dyes is surprisingly easy.

I decided to try a camellia dye because it seemed very straightforward. There are many camellias blooming in my neighborhood at this time of year. It would have been cool to take camellias from my next-door neighbors, but unfortunately their bush is barely blooming at this time.

Instead, I went further from my home to a camellia bush which was in full bloom, and I took some flowers. Did I ask permission? No. But I specifically picked the flowers which were beginning to wilt and left the immature flowers and flowers at their prime alone. I daresay the camellia bush looked nicer after I removed the post-prime flowers. No, I wasn’t stealing camellia flowers, I was spontaneously volunteering to groom their camellia bush to make it look nicer (until the next set of flowers starts to wilt).

I pulled apart the petals in a pot, filled the pot with water, added salt, and started boiling. Meanwhile, I soaked the linen cloth in a solution of 4 parts water and 1 part vinegar. This went on for an hour. 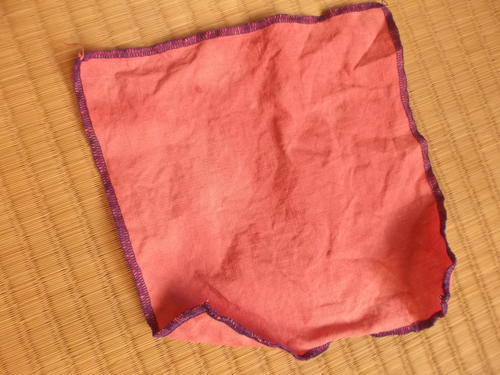 It came out darker and redder than I was expecting (I was expecting a pink color), but that’s fine. This is so cool that I will probably end up dying more pieces of cloth just to see what colors I can get.

This technique is supposed to work for most natural fibers (linen, cotton, silk, wool, etc.) but will not work for synthetic fibers (polyester, nylon, etc.)

About a month after I tried out camellia dye, I then tried lavender-rose dye. The process is the same, I just used lavender and rose petals instead of camellia petals. Whereas with the camellia dye I used store-bought lemon, this time I only used plant ingredients which grew in my neighborhood – the lavenders (there is a ton of lavender in my neighborhood), the roses (I used the type of rose which is practically a weed around here, not the type grown for aesthetics), and even the lemon (not as many lemons as lavenders and roses in my neighborhood, but I knew where I could get a local lemon). Here is the result:

A piece of cloth dyed with lavender – rose – lemon.

I wonder why the dye recipes say to use lavender and rose TOGETHER and not separately. Do the chemical compounds in lavender and rose react to each other in a way which creates the dye? I guess if I wanted to find out, I could always try to dye cloth only with lavender-lemon or only with rose-lemon.