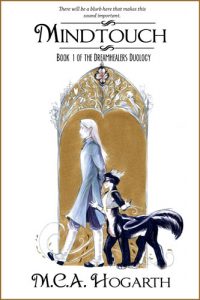 What is this novel about?

This is set in the Pelted Universe, in which space has been populated by species genetically engineered by humans known as the ‘Pelted’ (humans are still around too, but outside of Earth itself, the Pelted are far more numerous than humans).

Jahir is an Eldritch, a species which is not ‘Pelted’ yet also was designed by humans way back when. The Eldritch either die as children, die in childbirth, or have super-long lifespans (as in, multiple centuries). They have ESP, and are also very private and have little contact with outsiders, so when Jahir decides to go off planet to get a medical education, he has very little preparation for life off of his home planet, and the galaxy ain’t prepared for him either.

However, he meets Vasiht’h, who is a Glaseah, one of the Pelted species which also has ESP powers. They hit it off, and Vasiht’h helps Jahir cope, and, well, this story is labelled as ‘romance’…

I cannot think of anything particularly sexual or violent in the story offhand, though there are dying children.

Tell me more about this novel.

This is the first book in the Mindhealers Duology (there is also an additional novella).

Though to be honest, if I had not bought both books in the duology at the same time, and instead had just bought the first book without the second book, I probably would not have bothered to buy the second book.

I feel really ambivalent about the presentation of asexuality in this novel.

“If I was truly passionate about both, I’d be doing it already,” Vasiht’h said, and sighed. “The truth is I don’t think I’m really passionate about anything. There are things I’m interested in. But grand passion? That’s not something Glaseah are built for. We don’t get swept up in rushes like species with more excitable hormone profiles.”

So get that – Glaseah are passionless and don’t feel sexual urges because they lack hormones. As a species.

Meanwhile, I’m not entirely clear what is going on with Jahir’s orientation, but he has strong touch-aversion, because he is an Eldritch, and Eldritch tend to have strong touch aversion as a species.

On the face of it, there is nothing wrong with the concept of having an alien species where, due to a low level of hormones, the lack passion and interest in having sex, and are for practical purposes asexual.

Though at this point, I am pretty irritated at the way they present hormones as mainly influencing sexuality and ‘passion’ and not a zillion other biological processes. For example, the hormone thyroxine regulates metabolism in mammals (and maybe other kinds of animals, I don’t remember off hand), and the Glaseah are mammals. If they are low in hormones, then does that include thyroxine, and does that mean that the Glaseah have some non-hormonal mechanism for regulating metabolism. What about the hormone cortisol? Though cortisol levels fluctuate dramatically in healthy people (which means having low cortisol at a particular moment might be okay), having a permanently low cortisol level is fatal in humans (and I presume in mammals in general).

The thing is, this story does not exist in a vacuum. There is a common misconception that asexuality is caused by someone having a certain hormone profile. While I acknowledge that having low levels of certain hormones may induce asexuality, this is not the case for most self-identified asexuals.

And then there is the thing about saying that a character lacks interest in sex / has strong touch-aversion BECAUSE OF THEIR SPECIES. On the face of it, there is nothing wrong with it, there are animal species which tend to like / dislike touch more than other animals species. However, asexual humans tend to get told that we can’t be asexual because all humans are sexual beings. In this context, saying that a character is asexual because of their species implies that it is species, and not the individual, which determines whether an individual may be asexual.

To be fair, the novel does present a character whose sexuality does not match the most common sexuality of their species:

“And… I’m really colony-world bred,” she said. “I wasn’t raised with Harat-Sharii’s culture. I know what we’re supposed to be like… we’re supposed to be enthusiastic and passionate, people whose love for life spills over into sex.” She caressed her cup with her fingertips. “I don’t have that. I mean, I have the passion, but I don’t want it to spread all over indiscriminately, like some kind of virus. I want one person. One man, preferably, so we can have kits the old-fashioned way.”

Here I am groaning AGAIN at the sexual = enthusiastic/passionate and asexual = non-passionate thing. If it were just one species which fit this pattern, that would be less bad than two species fitting this pattern. It reinforces the prejudice that people who are not into sex lack passion that much harder.

Also, most notably, this is not the asexual character (or even Jahir, who I’m not sure is ace or not).

I do consider this to be asexual content, which is why this story has a rating of 2 and not zero. However, when I read ace fiction, I want something which either reflects my experience as an asexual, or at least seems to reflect the real-life experience of other asexuals (there are works of ace fiction which do not look much at all like my experience, but seem realistic in the sense that the ace characters are like some real ace people). I feel that this novel fails at this harder than most of the ace fiction I’ve read.

What would have made a world of difference is if one of the minor human characters had come out as ace. It need not have been a big deal, it could have been a quick ‘By the way, I’m human, and though most humans are not asexual, I am asexual.’ That would have greatly counteracted the common bad stereotypes of asexuals which this novel seems to support.

That said, some parts are probably still relevant to some ace people. In particular, people who want a protagonist who is strongly touch averse (very, very rare in romance stories) may be interested in Jahir.

Given that the novel is the way it is, the ace representation in this book bugs me more because the writer herself claims that this is an ‘asexual romance’ on her website. I think, given how marginalized ace people are, and how little representation there is of us out there, a writer ought to avoid labelling this as ‘asexual’ because, intentionally or unintentionally, I feel it reinforces too many bad stereotypes of asexual people, and I think it would be less bad if it did not present itself as being ‘asexual’ fiction.

Was this written by an ace?

No. The ending did make me want to give the second novel in the duology a chance (especially since I had already bought it), but then it blew that chance.