At Boyd Camp, I only had a few miles left of the official Ohlone Trail, and they were all downhill! After the work my legs did the previous day, this seemed pretty great.

It turned out that it was a viciously steep downhill on a road. I suppose it was still easier than trying to go up than hill, but getting down still required an effort. And in contrast to the previous day when I practically saw no people, this morning I ran into a few people who were doing early morning exercise things. END_OF_DOCUMENT_TOKEN_TO_BE_REPLACED

In Part One, I embarked on my hike of the Ohlone Trail in Alameda County, and reached Sunol Backpacking Camp. In this part, I describe my hike from there to Boyd Camp. 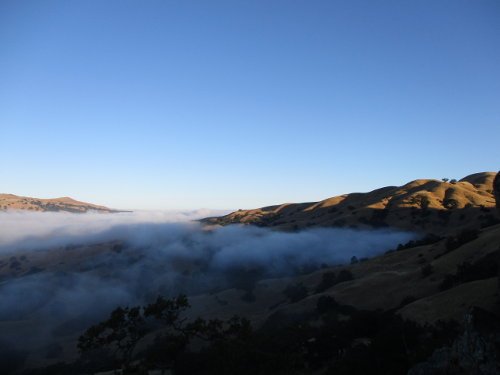 When I woke up at camp, I got to see a lot of fog in the Sunol Valley.

I was surprised when I looked out at the Sunol Valley in the morning. Fog! And the forest below the camp looked almost lush. END_OF_DOCUMENT_TOKEN_TO_BE_REPLACED

This is what the East Bay (that is, the eastern side of the San Francisco Bay) looks like in summer. Even though Alameda county has a population of 1.6 million people, a lot of it is still like this.

This June, I hiked the entire length of the Ohlone Trail. I had several goals: 1) I did not distinctly remember staying overnight in Alameda County even though I know I’ve spent many nights there 2) I had just finished sewing my net-tent and I wanted to test it out before hiking a few hundred miles with it and 3) I wanted to prepare myself physically for hiking a few hundred miles.
END_OF_DOCUMENT_TOKEN_TO_BE_REPLACED 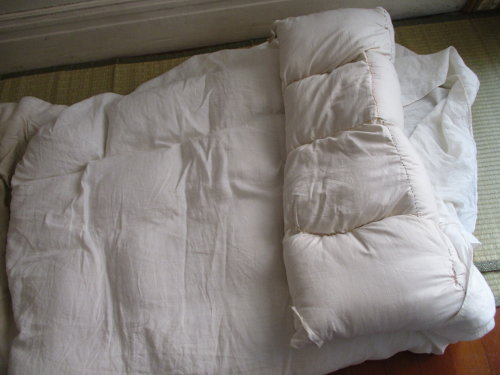 My functionally complete comforter, partially pulled out of the linen cover.

In Part 1, I described how I made my new comforter. Now, I’m going to describe how it’s working out for me.

I had never worked with kapok before, so I was not sure how to stuff it. The first few chambers I stuffed relatively lightly, but then I decided to increase the stuffing to make sure they were sufficiently full. The result is that, aside from the first few chambers, they are all very full and firm. This means they are not so pliable that I can comfortably drape them close around my body, especially when I am lying on my side (I am mostly a side-sleeper).

Furthermore, because I used so much kapok, and I used baffle boxes, the insulation power is great. A little too great, in fact. If I lie on my cotton futon, wear my ordinary sleepwear, and drape it over me so there is not much exposure to outside air, it’s a little too warm. ‘Too warm’ is much better than ‘too cold’, since I can drape it in a way which exposes me more to the cold air.

As I’ve been using the comforter, I’ve learned how to drape it better. It really helps that I oversized the linen cover. I can excess linen drapes over me where the comforter does not, which adds flexibility. It’s colder than the comforter, but warmer than being naked, and because the comforter is too warm, it actually helps. (And linen feels so nice).

In fact, this comforter is so warm that in the first week I didn’t use my cotton mattress at all. I lay down just on the goza mats (which are just above my hardwood floor), and just as the comforter is heating me up, the floor (via the thin goza mats) drains the heat away. It felt strangely comfortable. I’m fairly tolerant of sleeping on hard surfaces (I once slept on a concrete floor with just a very thin mat and a layer of polyester fabric as my ‘bed’) – the hardwood floor itself would probably be too hard for me, but the goza mats provide just enough cushioning. The main reason I need a mattress at all is for insulation, and when my comforter is so warm, the mattress is less necessary. I find the cotton futon more comfortable than lying directly on the goza mat, but temperature is more important.

Not needing to use my cotton futon every night is a good thing, because the less I use it, the longer it will last. Furthermore, the less frequently I use it, the less moisture it will build up, which means it will be less likely to get moldy.

After the first week, the weather got colder, which meant that the floor/goza mats were draining too much heat from me. Thus, I rolled out my cotton futon again for insulation. The comforter continues to be very warm, but in this weather it’s not ~too~ warm.

You know how I said that my new comforter is really firm? It turns out, if I lay it down on the goza mats, and lie down on it, it feels … really comfortable. It feels more comfortable than my cotton futon. And it provides all of the insulation I would ever need from the floor. And it only has about a third of the weight of my cotton futon, which is already light for a mattress. And since kapok repels water, it is a lot less likely to get moldy than cotton. In other words, while making a comforter, I unintentionally made a good mattress, a mattress which in some ways is better than my cotton futon.

(And as a mattress, it would probably be illegal to sell in the United States because a) kapok is very flammable and b) I used no flame retardants whatsoever. But making such a mattress for personal use is completely legal).

The one problem with using my comforter/mattress as a mattress right now is I need a comforter to keep myself warm at night. I already gave away my old comforter to my dad, who did not like it any more than I did so he gave it to my mother (I’m still waiting to see whether my mother will keep it / use it long term). However, when the nights are warm enough than a simple blanket will do, I expect that this will become my mattress, or at least I will switch it off with my cotton futon on alternating nights. This increases the value to me because I have a great use for it on warm nights too!

I also recently discovered that someone is selling a kit to make a ‘throw blanket’ out of kapok & cotton with a linen cover. Of anything available for sale, this is probably the item most similar to my new comforter/mattress. Based on the design, I’m guessing it requires less labor to make, yet less durable. It’s probably also more pliable. And my comforter is a lot longer than 40 inches (otherwise it wouldn’t cover my body or be big enough to use as a mattress). I probably did spend about 150 USD on the materials of my comforter, but that is mainly because organic linen is expensive. (If I had chosen to make the cover out of organic cotton instead of linen, I would have spent much less money on materials). (But linen feels so good that, over years of use, it’s worth the extra money). (And I notice that website is not claiming that their linen case is made from ~organic~ linen).

It feels great to sleep in something which I designed and made myself, whether it’s in a campsite or at home. And these projects are addictive – I’m already working on another project which I intend to use long-term in my bedroom. I was talking to some people last week about what we did

“Demisexual Goes Meta!” – demiandproud analyzes which of her posts get the most clicks, including the effect of Carnival of Aces. This is followed by the sequel: “This Demisexual Forgot to Be Proud”.

“A brief history of A Carnival of Aces” by Siggy is exactly what it says it is.

“I’m Not a Baby Ace Anymore” by Perfect Number is about how she became comfortable IDing as ace, and the role the Carnival of Aces played.

“Advice for Hosting the Carnival of Aces” was written by myself. Irony: after making a big fuss about not missing submissions, I (almost) forgot to put my own submission into this round-up.

“How the Carnival of Aces Helped Shape My Blogging Experience” by Blue Ice-Tea is also exactly what it says it is.

Thanks to all of the contributors!

1. I will continue to accept submissions for this Carnival until December 5th. These submissions will be added to this round-up post. Perhaps, if you come back to this post in a few days, you’ll find more submissions (or perhaps not).

2. The December 2018 Carnival of Aces will be hosted by Next Step: Cake. Here is the call for submissions.

3. There is still no host lined up for the March 2019 Carnival of Aces. If you would like to host in March 2019, you may volunteer here.