This is all in Shikotsu-Toya National Park.

Yoteizan, also known as Makkarinupuri (Ainu name) and Ezo-Fuji (‘Ezo’ is the old Japanese name for Hokkaido, and ‘Fuji’ … I think you can figure that one out), as seen from Nakayama Pass.

This building was busted by the 2000 eruption of Mt. Usu.

There is Nakajima, the set of islands in the center of Lake Toya.

A close up of the islands in the lake. 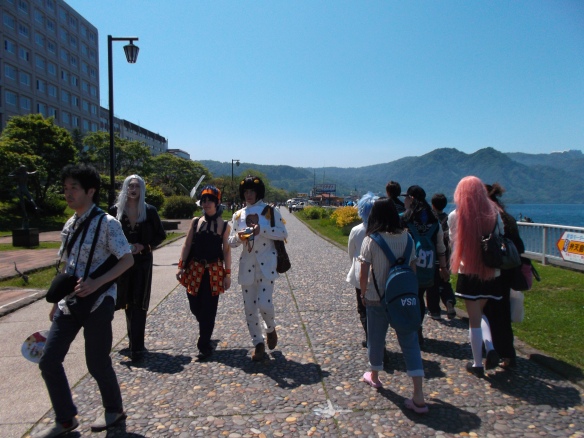 This park is famous for being one of the last wild habitats of a rare endangered native species known as the cosplayer (okay. there was just an anime and manga convention at Lake Toya that day). 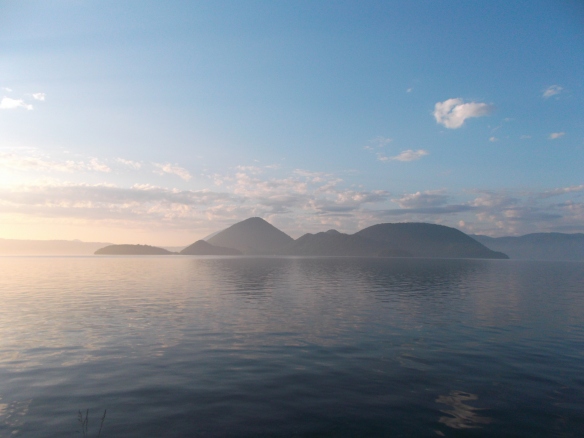 This is ‘Hell Valley’

This is the iron pool – as you can see, iron ore is building up on the side. (Noboribetsu Onsen) 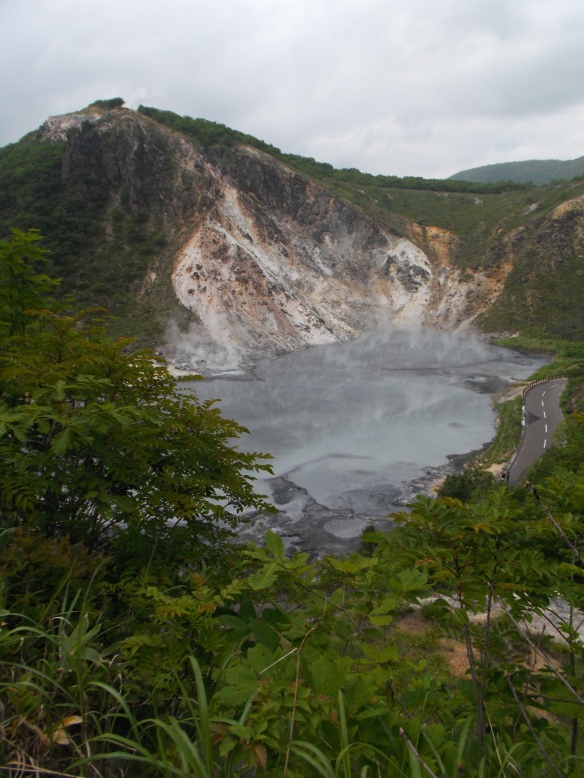 This is Oyunuma, which is 50 degrees Celcius at the surface, 130 degrees at the bottom (this lake is 22 meters deep), and it is the largest body of hot water in all of Japan. (Noboribetsu Onsen)

This is the BEST FOOTBATH IN JAPAN! And it was made by nature – this stream flows from Oyunuma, is naturally hot, and you can just dip your feet in. It is way better than artificial footbaths.

This is the Kushiro Wetlands National Park.

This is a tancho tsuru; there are only about 3000 alive in the world today. They once were common throughout Hokkaido, but due to habitat loss and hunting, they were believed to be extinct until about 10-20 birds were found in the Kushiro wetlands in the 1920s. All of the tancho tsuru in Kushiro – and thus Japan – are descended from that small flock.

Who is hiding behind the big bird? 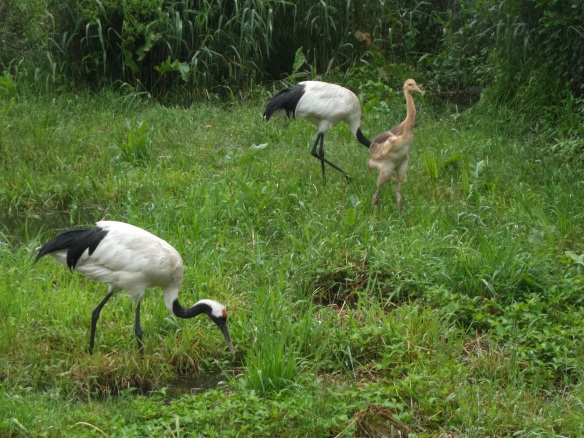 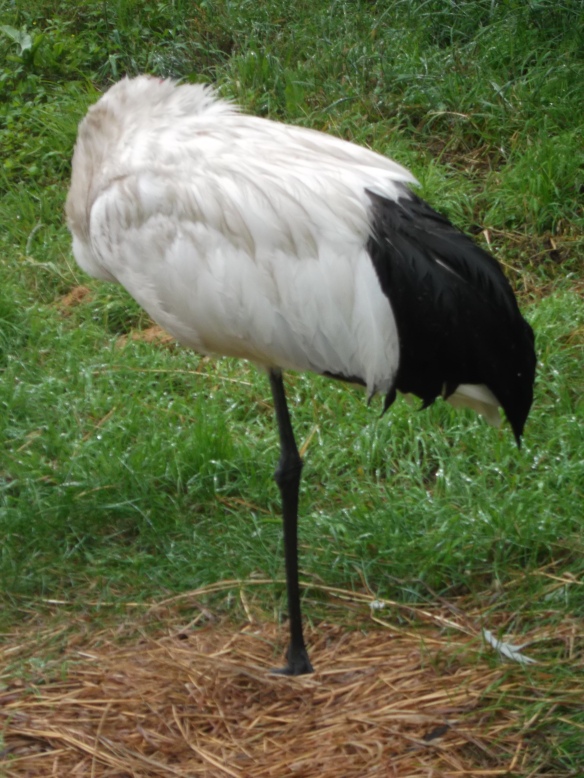 This is how tancho tsuru sleep.

This is the tourist train which goes extra slow so you can see the river.

This is the Kushiro river as seen from the train.

A historic building in the village of Toro.

This is Lake Toro. It is a saltwater lake, since it used to be connected to the ocean.

One of the swamps.

These photos are all from Akan National Park.

This is Lake Akan.

These are pools of hot spring water and steam coming out at the side of the lake.

A view of Lake Onnetto from above. 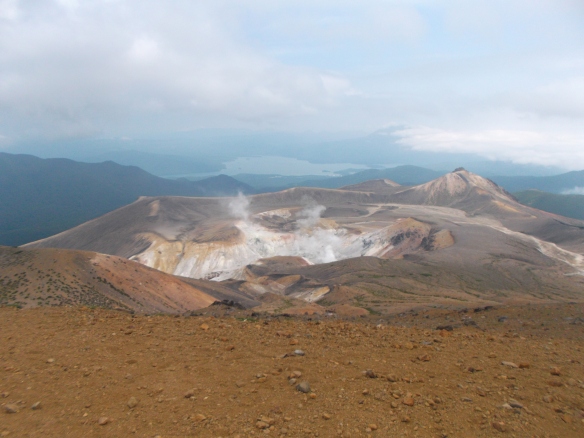 Far in the distance is Lake Akan and Mt. Oakan about to be smothered in clouds. But there is an ACTIVE VOLCANIC CRATER in between!

Here is the little lake within the Meakan crater, a jet of volcanic gas/steam, and Akan-Fuji. 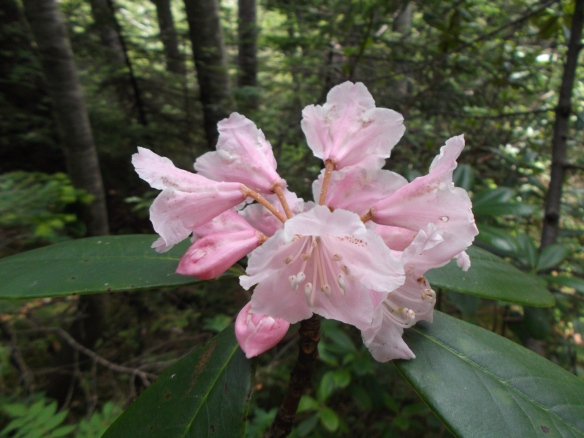 And here is Lake Onnetto close up. 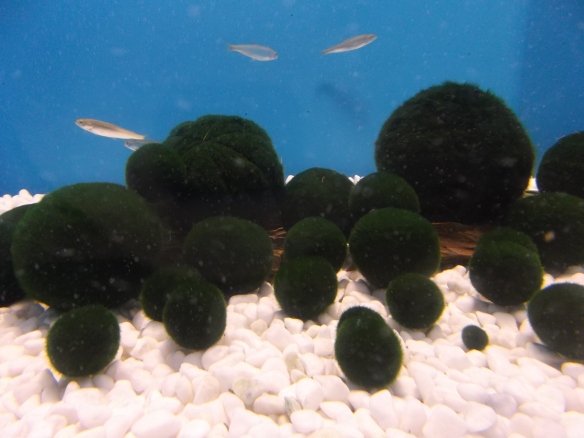 The famous marimo of Akan lake – I did not want to pay 1900 yen to go see a few marimo bobbling in the lake, so I took this photo at the admission free eco-museum instead. 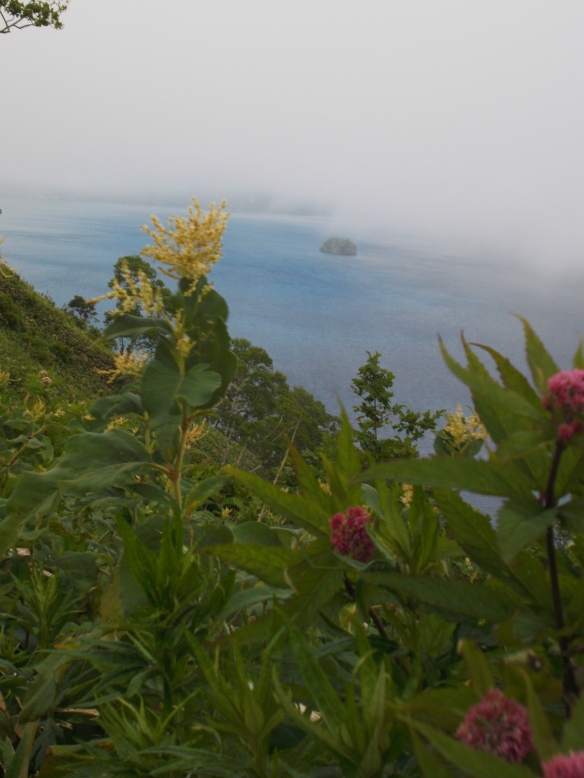 This is Lake Mashu, which some people say is the most beautiful lake in Japan. You can see what it looks like on a less foggy day at this blog. 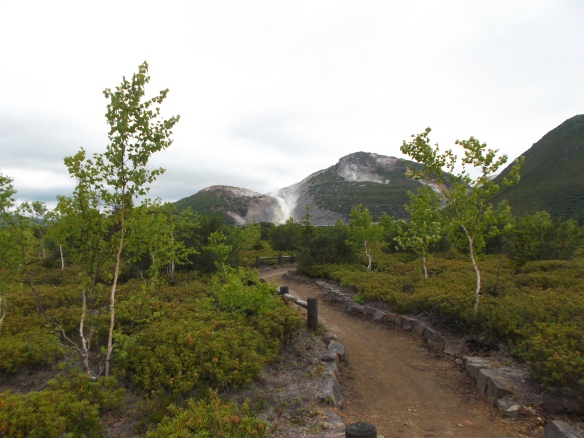 After all of that running around, I am ready to stick my feet into sand full of hot spring water right next to the second biggest lake in Hokkaido.

This is Rebun island, part of Rishiri-Rebun-Sarobetsu National Park.

Looking towards Sukai Cape, on the northwestern end of the island

A view of Sukoton Cape and the small island to the north.

Wildflowers on the island of wildflowers 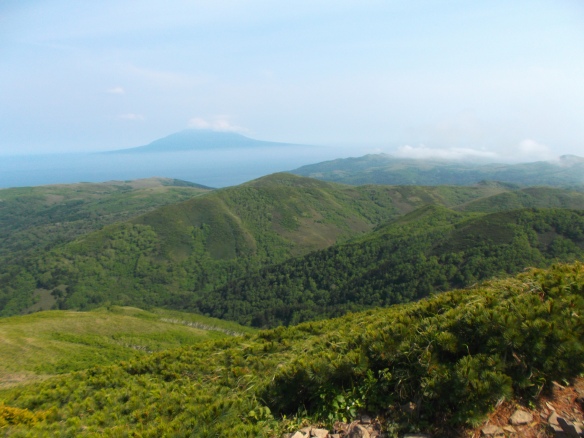 A view of Rishiri-Fuji from Rebun Dake, the highest point on Rebun island. 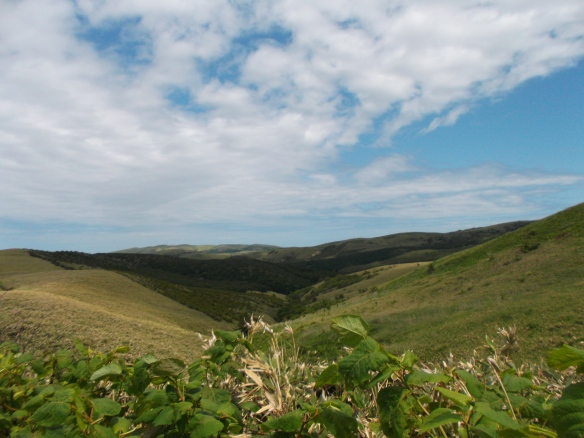 Along the path from Sukai Cape to Uennai

Looking down at the west coast of Rebun.

Near the western coast of the island.

While descending the steep slope to the rocky beach, I saw this waterfall.

On the rocky beach heading towards Uennai 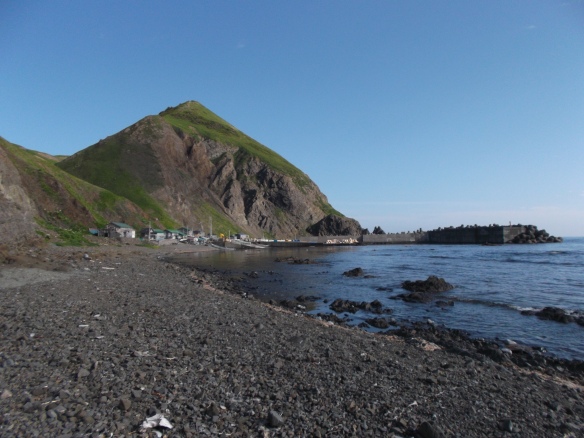 The small fishing village of Uennai does not have a road – access is by foot and by boat only.

This is right behind the village of Uennai 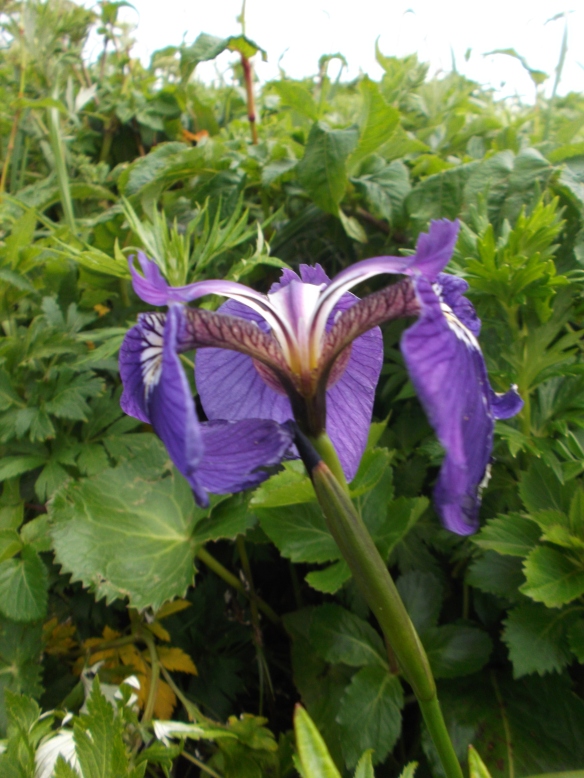 This is a slope on the popular trail around Momoiwa.

Looking down at the coastline around Motochi.

This is Rishiri island, part of Rishiri-Rebun-Sarobetsu National Park. 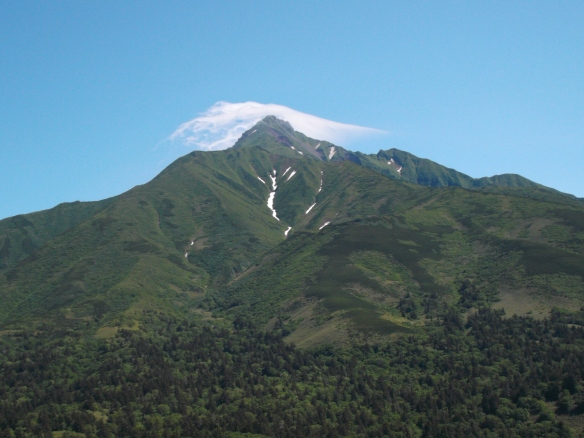 I found this chipmunk very close to Himenuma lake.

This is Rishiri-Fuji as seen from the 8th station (climbing up the mountain).

Here is another shot from the 8th station, looking at the coastline between Oshidomari (largest town) and the airport, with Rebun island visible in the distance.

An alpine flower spotted near the 8th station of Rishiri-Fuji.

This is a photo taken very close to the summit of Kita-dake. 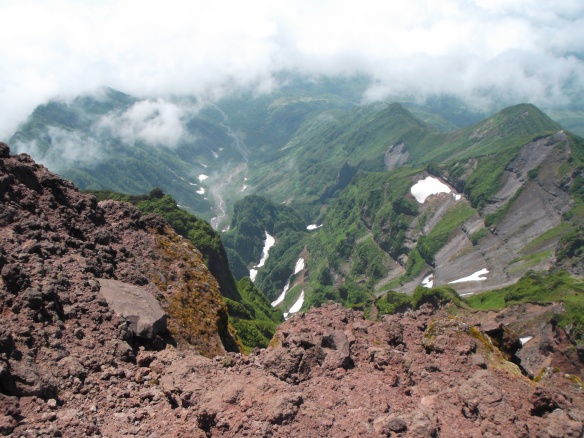 Another shot from near the summit of Kita-dake.

Here is the shrine at the top of Kita-dake (North Peak).

Looking at the sea from the summit.

A butterfly I spotted on the trail between Ponyama and Himenuma lake.

Well I say that I am vegan, I often get reactions like:

“But you look so healthy, how can you be vegan?”

“People need to eat meat to do athletic things”

“Oh, so you do it for health reasons

“Wow, your diet must be so healthy”

The thing is … I do not think veganism is inherently unhealthy or healthy.

I think it is possible that vegans in the United States, Europe, and Asia are healthier than their omnivorous counterparts, but that would be because vegans have to be more careful about their food. It is being careful about food, not the veganism itself, which might lead to better health.

I have spent all of my life in parts of the world where animals suffer horrible abuse. The vast majority of people are a) ignorant b) in deep denial or c) both with regards to the horrors they support by eating animal products. Either way, they are uncomfortable talking about it – people generally do not like having their ignorance pointed out, and are even more touchy about denial. If I am being vegan just for health, then it means that I am not challenging their (un)ethical stance on eating animals. If I am doing it for ethical reasons, and say so, even if I am super polite and never directly comment on the fact that they eat animals, they understand that I am challenging them on ethical grounds.

I am writing this on February 16th, 2014, in Naha, Okinawa, though this post will not be published until May (EDIT: July).

I spent 7 hours the Okinawa Prefectural Museum. I feel like I just went through a crash course in Okinawa-gaku (Okinawan studies), and my head is swimming with historical, geographic, ｓcientific, archeological, and cultural facts about the Ryukyu islands. Yesterday, I visited Shuri castle, which has a mass of detail about the Ryukyu royalty.

And yet, all of this I feel misses an important facet of Ryukyu culture – which I did manage to get a glimpse of in the Shuri District.

I ran into an American who has been living in the Shuri district for four months. He`s married to a woman born and raised in Shuri, and all of his neighbors know everything. As he put it “They know what’s in my mail” (the same mail carrier has been working on that street for 20 years, and he talks to everyone). Everybody knows everyone else, and they are all a part of a close-knit community.

One of the most touristy islands in the archipelago is Taketomi, mainly because of its well-preserved traditional village in a relatively convenient location. The top tourist activity is riding around in a ox-driven cart. I of course refused to do this because I am against animal exploitation. However, I also noticed many signs around the village protesting against the ox-cart tours. My Japanese is not good enough to understand their grievances, but they are angry enough to put signs up all around the village complaining about the company which runs the tours, and I noticed many different organizations signed the signs, including the Citizen’s Hall and the local PTA.

Speaking of the PTA, even though Taketomi has less than 500 residents, it has a school, and … I saw at least ten schoolchildren, which would be quite high in rural Japan. Well, the Ryukyu islands are not rural Japan … the American in Shuri commented that Okinawa has a much higher birthrate than Japan, and that while Japan’s population is in decline, Okinawa is experiencing a population boom.

And why is Taketomi’s village so well-preserved? Because the residents decided collectively that they wanted to preserve their traditional way of live, and saw to it that their coral-sand roads would not be covered with asphalt.

I think this is the single most noteworthy feature of Ryukyu culture. People cultivate close personal relationships and work cohesively together as communities, forming citizen groups, etc. I had read before that one reason Okinawan people live so long is that they develop this tight set of meaningful social relationships – which also turns also to be a force to preserve a village, take down the United States Civil Administration of the Ryukyu Islands, among other civil acts.

This is something which is not mentioned in the museum exhibits or tourist brochures.

EDIT: After writing this post, I found a tourist brochure with this sentence in a section called “Island of Longevity”:

“If you want to live long and well, eat healthy foods used for Okinawan dishes, exercise effectively, slow down to Okinawa time and get the ‘yuimaru spirit’ by weaving a supportive web of friends and family.”

So I guess there is a tourist brochure which mentions the dense personal relationships of Ryukyu people, though it does not mention the connection between the ‘yuimaru spirit’ and, say, organizing the reversion movement.

The Notes Which Do Not Fit
Blog at WordPress.com.